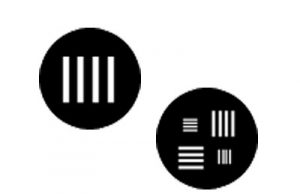 Santa Barbara Infrared manufactures a wide range of targets for visible, and infrared/FLIR electro-optical testing. These targets complement our complete line of Visible and IR test products. Our targets are designed to function with one of SBIR’s target wheels.  Utilizing a variety of manufacturing techniques, including conventional machining, photochemical etching, electro-deposition, electrical discharge machining (EDM) and laser cutting. SBIR targets are manufactured to exacting mechanical tolerances. SBIR manufactures all of the targets specified by MIL-STD-1859 and the Tri-Service Guide for thermal imager testing.

For example, a pinhole target that is 0.0030″ diameter would have a standard tolerance of +/- 0.0003″. Tighter tolerances are available if required.

Four-Bar Targets
4-Bar, 7:1 aspect ratio targets are used to perform Minimum Resolvable Temperature Difference (MRTD) measurements. This test is a measure of overall system performance, and is the minimum differential temperature required for an observer to just detect a target of a specific spatial frequency. A set of targets with various spatial frequencies is used to measure MRTD as a function of spatial frequency.

Multiple Four-Bar Targets
Constructing a target with several 4-Bar targets on a single target plate is a cost-effective means of multiple spatial frequency MRTD testing. Applications include production testing, GO/NO-GO testers, and quick performance checks. NOTE: Measured MRTD can vary with the location of the target due to the cos4 (O) effect. Additionally the presence of multiple targets may affect the objectivity of the observer. Please contact SBIR for recommendations.

Pinhole Targets
Pinhole targets are typically used for tests such as Minimum Detectable Temperature (MDT), Alignment, and Boresight, or as a limiting aperture in front of a source of radiation.

Alignment Targets
Alignment targets are useful in boresighting applications, collimator alignment, and focusing. With an SBIR target projector system incorporating a target alignment light, these operations are greatly simplified. Pinholes, as well as pinhole-and-cross combinations are typically used; others are available upon request.

Edge/Slit Targets
An edge/slit target (sometimes referred to as a half-moon target) is used for MTF testing. The unit under test (UUT) images the slit, and a line of video is stripped out. MTF is obtained from the Fourier transform of the video data, corrected by the finite slit width response. By measuring the output as a function of variable slit width, the slit response function (SRF) is obtained. The SRF provides the imager Instantaneous Field of View (IFOV).

Interlace Targets
An interlace target is used to detect poor interlace mirror adjustment, as well as to identify strapped or dead channels. These faults are seen as deviations from the ideal smooth diagonal line.

Three-Temperature Targets
Both emissive and reflective coatings can be incorporated into a single target. When this type of target is used with our target projectors, a total of three radiance values can be projected at the same time. Applications for these targets include plume or vehicle signature simulations. Contact SBIR for further details.

Frequency Sweep Targets
Typical applications for the frequency sweep target include setting system focus, GO/NO-GO screening, Contrast Transfer Function (CTF) measurement, and environmental testing. The frequency sweep target can also be used to evaluate image processing algorithms, such as line-to-line interpolation. Targets can be made with either a linear or logarithmic sweep.

Distortion Targets
One way to measure geometric distortion is by presenting a uniform array of precisely-located fiducial marks to the UUT. These marks are then either measured on the display, or compared to a regular array of lines generated by a signal generator. A regular array of pinholes is excellent for this application.

Abingdon Targets
This target is used to evaluate the speed and accuracy of image processing algorithms. The task is to find the medial axis of the cross. The area of the cross and its intensity are equated to the area and intensity of the object it is meant to simulate. It is a useful measurement tool to indicate how quickly the algorithm can find targets in the real world.

Gray Scale Targets
Gray scale targets can be manufactured in a variety of step size functions and gray levels. The step functions can be linear or logarithmic, from zero to 100% transmission. Gray scales are used to measure linearity and dynamic range in a single operation.
Note: these targets are all custom-made and require all input from a customer specification drawing.

Scene Targets
Scene targets consist of a sub-pixel dot pattern deposited onto an IR transmitting substrate. SBIR produces a variety of scene targets with varying levels of resolution and grayscale. Scene targets are typically used for mission simulation and training.
Note: these targets are all custom-made and require all input from a customer specification drawing.

Custom Targets
Special targets can be designed to fit your application, or produced from your specifications. Contact SBIR with your testing requirements, for assistance in developing a complete test scenario.

Discrete targets mount directly to the blackbody target support plate. These targets can be oriented in 90 degree increments to do horizontal and vertical MRTD and MTF testing. 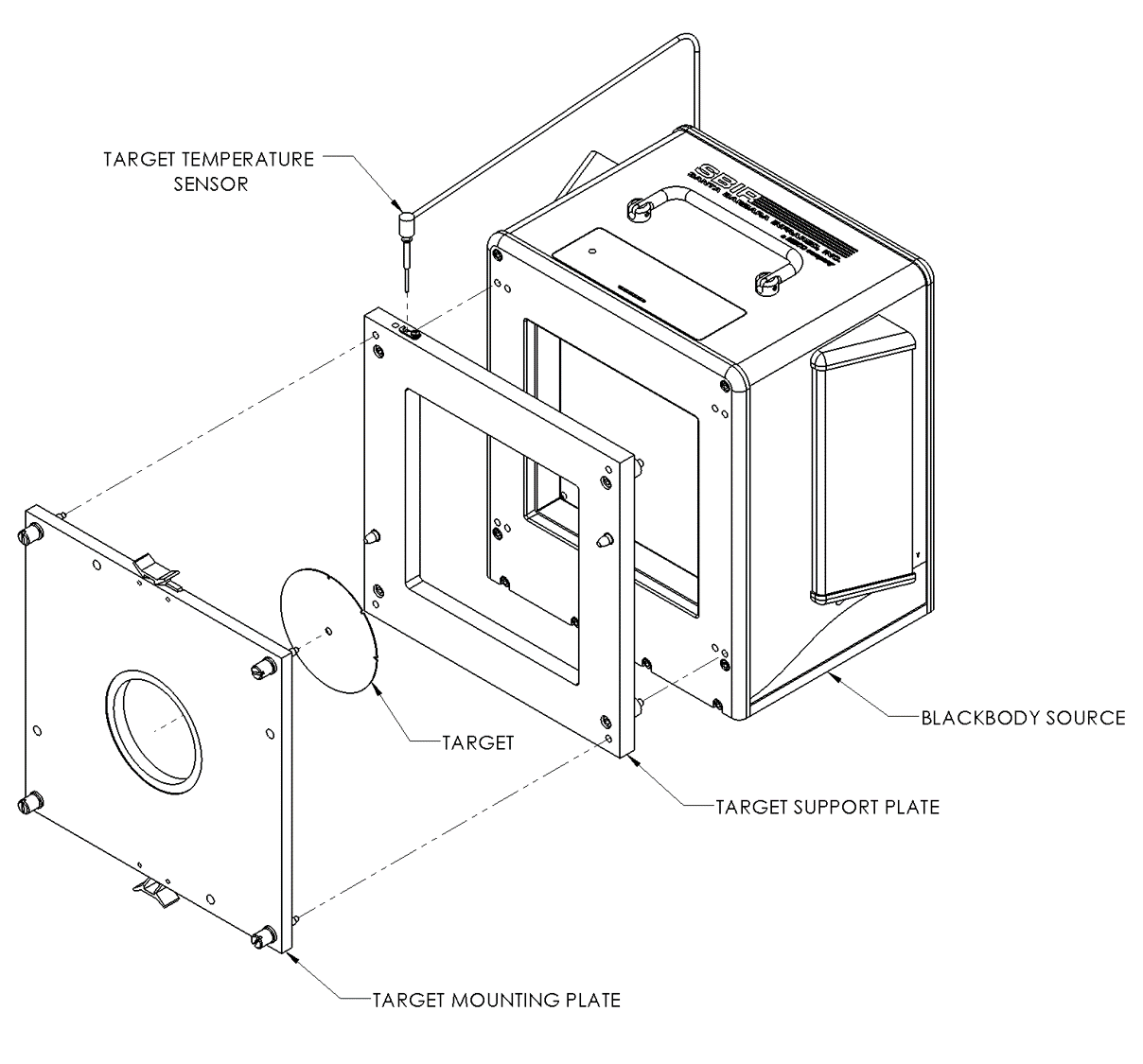 Wheel targets are mounted in counterbores in the target wheel. The targets can be rotated in their mounts by a spanner wrench. Target orientation is adjustable to precisely match the FLIR orientation, eliminating the problem of edge aliasing. Alignment reference features on the target and the mount are provided at 0, 45 and 90 degrees. See the target wheel section for more information.

Targets can be manufactured with the plane of the target pattern offset from the infinity focus of the collimator. The result is a slightly divergent beam from the collimator, which simulates a target at a prescribed range. This precisely repeatable range simulation technique does not require refocusing between targets, as the range is pre-set in the target. This technique is a very cost-effective means of performing range simulation.

The Emissive Target is the industry standard for IR testing. Our 14000Z Series target projectors are designed for use with these targets. The targets are coated with a high-emissivity, structured black coating, identical to that of the blackbody. Targets are designed to provide a uniform background with high thermal stability. The behavior of such targets is very well-characterized. The temperature of the target is measured with a high performance temperature sensor. A blackbody behind the target is held at a differential temperature relative to the target temperature, and the radiance difference of these two surfaces, at different temperatures, forms the IR image.

SBIR also offers a line of high quality Reflective Targets. Instead of a high-emissivity black coating, these targets are polished and coated with a high reflectance gold. In a reflective target scheme, the radiance of the target itself is not projected. Instead, the target reflects energy from a high-emissivity reference source.

For custom requires please contact the SBIR sales team at (805) 965-3669 or sales@sbir.com for applications engineering assistance or specific test needs.

Information subject to change without notice.